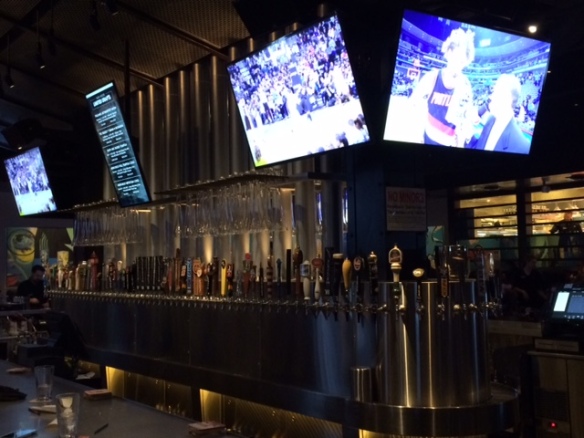 Amid the brewery acquisitions and Portland’s westside invasions, Pioneer Place is now flooding with beer courtesy of The Yard House, a sports pub/family dining restaurant that also, most likely, presents more tap handles than any single establishment in Oregon: 130. Yes, one hundred and thirty beers on draft. So let’s first focus on a bunch of numbers.

First, from their own press release in July, 2012, “Darden Restaurants, Inc. (NYSE: DRI) announced that it has agreed to acquire Yard House USA, Inc. for $585 million.” Olive Garden is another restaurant chain in the Darden Restaurants portfolio. More numbers:

34: number of television sets throughout the Yard House, all airing games.

42: The number of the 130 total taps pouring beers from the Pacific Northwest. This actually represents the largest number of regionally brewed beers in the chain.

250: The most taps presented at a single restaurant, which I believe is the Irvine, Calif. spot where it all started back in 1996 when, according to their own About page, “the craft beer revolution began nearly 20 years ago.”

67: Number of six-tops at the Portland Yard House. (Scratch that; two of those are four-top tables.)

1: Master sommelier employed by Darden Restaurants. George Millotes is one of 219 such experts in the world. I’m told several Cicerones (with apologies to Ray Daniels, those are the sommeliers of the beer service world)

All of the above underscores the impressive stats this outpost brings to downtown Portland that, truth be told, does not feel very Portland. If you want the geekiest beers on the westside, you’re going to head to Bailey’s Taproom. But Bailey’s’ 24 taps made me realize, Yard House offers as many taps as the top 7 beer bars in the city. Quantity over quality is never the better option, but here’s the deal: if you can get over the Yard House being a $585 million chain from Orange County, in a neck of these urban woods populated by other chains such as Qdoba, Jimmy John’s, and, egads, Buffalo Wild Wings around the corner if you want the lowest common denominator of sports bars, at least there’s a level of quality accompanying all those screens and mile’s worth of draft lines. Upon being invited in to explore the over the top menu, I’m happy to report that the Brussels sprouts atop “ripped” potatoes–described to me by their corporate executive chef Carlito Jocson as, “because potato skins are too eighties”) are crave-worthy. The Vietnamese banh mi sandwiches are pretty good for being this far west of 82nd Ave. You can order any of the tacos “vampire” style which entails grilling cheese on the outside til it becomes crunchy and hand-holdable.

And most importantly, among those nearly eleven dozen taps, every level of beer drinker will find something with his or her name on it. Yes, there’s behemoth light American adjunct lager. But I also lost count of how many great IPAs they had on–yes, multiple IPAs because whoever tag-teamed on the beer list knew we demand such things. Boneyard RPM? Check. Boneyard Hop Venom to boot? Check-check. Ballast Point Sculpin is in the mix as well. The cider section alone trumped most places’ attempts at placation. When the house beer being aged in Pappy Van Winkle barrels is ready, you bet I plan to pop down into this basement-level resto and try it. 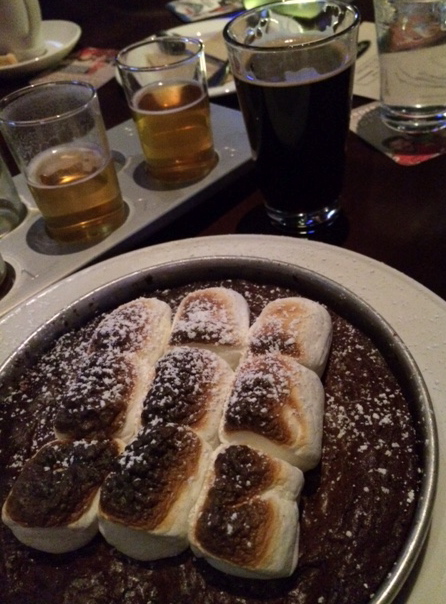 Speaking of how over the top they go, you can pair a Base Camp S’more Stout with the largest friggin’ s’mores brownie. The marshmallows were toasted to perfection though I found the brownie itself a bit dry. I guess that’s where the wet stout comes in handy.