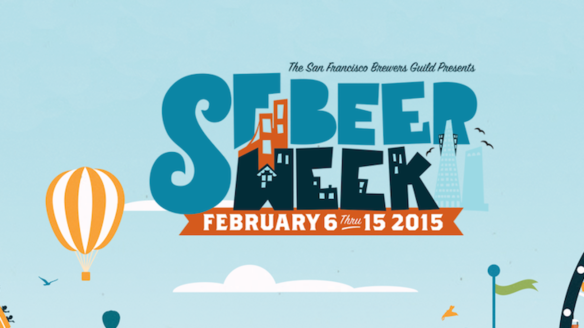 I love everything about SF Beer Week (namely the parts about San Francisco and it being a week of beer). Back in 2009, when I lived there and the first SFBW took place, I knew it was special but I didn’t know just how special. Everything about it was over the top yet just right. I remember the tap takeovers from locals like Anchor to ones nowhere near SF like Allagash. I remember the beer dinners including one from the always legendary Sean Homebrew Chef Paxton. And I recall going on the Beers 2 Breakers bike ride that inspired Bryan Kollesar, Derrick Peterman, and myself to throw a bona fide Beer Run the next couple of years. I won’t be doing the Beer Run again this year, sadly, but I am going back and this time, it’s a full-on night of Oregon Breweries, Beaver state beers that’ve never basked in the California sun. After visiting every brewery in the state for my brand new guidebook, I’ve put together this list:

The lineup is a sliver of what I know Oregon beer is all about: variety. Oh it’s also about greatness, depth of flavor and artistry, but look at that incredibly wide-range of beer styles (some traditional, some wholly made up). Let’s have fun with some numbers

1 braggot. Because of course Oregon has a dedicated braggot brewery in Viking. Actually, there are two (the other being Fire Cirkl)

2 X-mas beers. The commercial holiday may be over, but HUB keeps the season going here with Abominable (“A-bomb” is a hoppy winter ale) and Kentucky Christmas, the bourbon-aged version of A-bomb!

3 Bend. I strived for geographic diversity with this lineup since it’s OREGON Breweries Night, not just Portland. But when you have 20 amazing breweries in a town of just 80,000 people, of course I sought out more than one or two. By that measure, fewer than half of these are from PDX. Oregon’s a great place to road trip for beer and you’ll see waterfalls, hop farms, and gorgeous coastline along the way.

6 Darks. with no two alike. Some are barrel-aged while others have flavors like salted caramel (in collaboration with Salt & Straw ice cream) and delacata (winter) squash in the form of a porter braggot.

7 Farmhouse. and again no two alike. Yes Upright and Ale Apothecary both work within this realm but between their 5 beers being poured, they’re all wildly different

8 IPAs. various styles from PNW IPA to CDA to imperial to a triple

11 barrel-aged beers. Stouts, sours, strong ales and even a gruit. Barrels include bourbon, wine, and even gin.

21 GABF medals won by Barley Brown’s alone (4 last year, more than any other company). Breakside has won 6 including a gold for the American-style IPA being offered here. Both The Commons and Hopworks have earned 4 apiece, too.

90% RPM. This IPA is 100% delicious, but some 90% of Boneyard’s production is of this beer which I feel safe calling Oregon’s favorite IPA and you’ll see why. But wait til you try Notorious, which is basically a 3xRPM.

200 dollars. That’s how much Eric Cripe spent on the case of Hair of the Dog Fred From the Wood. Drink up and thank him heartily. I really had to call in some favors to make this event happen.

1811 Lager. No, not 1,811 lagers, but a lager named in honor of the year Astoria was founded, which is where Ft. George Brewery was founded many years later. With so many boldly flavored beers, I thought a lighter, pre-Pro lager was necessary to recalibrate our palates!

I hope to see tons of old friends and new ones this Saturday night at:

Books: Get your copy of Oregon Breweries for $20 (happy to sign ’em free)