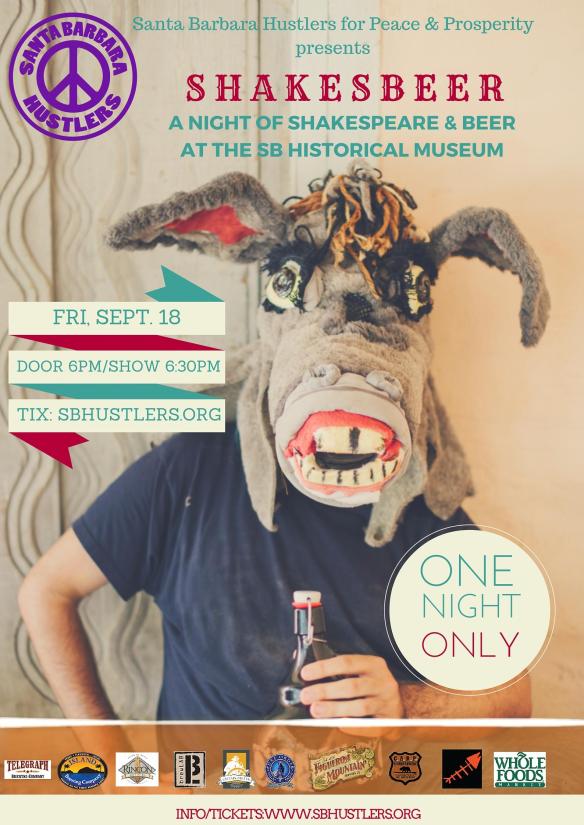 All the world’s a beerfest, and all the men and women merely hustlers.

Well, not all the men and women, just primarily four. Zachary Rosen is a Certified Cicerone—the beer industry equivalent of a Sommelier—and on September 18 he’s going to pair Santa Barbara area beers with the Bard of Avon. David Holmes is a theatrical director. Cecily Stewart is a professional ballet teacher. And Matt Turner is the co-founder of the Santa Barbara Hustlers for Peace and Prosperity, an approved project of the Share The Wealth Foundation that provides volunteering opportunities for those interested in becoming more engaged with their local community.
Shakes’Beer, a one-night event hosted at the Santa Barbara Historical Museum, seems more befitting of Ashland, home of nearly-yearlong Oregon Shakespeare Festival as well as breweries Caldera, Standing Stone, and Swing Tree.

The fundraiser is billed as “Shakespeare in the Park meets a beer festival pairing beers with different Shakespearean characters and themes.” With Holmes directing scenes and monologues and Stewart directing “interpretive ballet and an Elizabethan dance session,” Rosen directs the theatre-in-the-round of beers. He styles himself as a specialist in abstract beer pairing events, often combining beer with music and art. He got eight local breweries to design ten unique beers for the event, each one reflecting a different character. For example, Romeo will be liquidly portrayed by brewLAB’s Red Purl Saison (brewed with Perle hops, wormwood, orange peel, and licorice root) opposite Ricon Brewery’s Juliet played by a comely Belgian IPA adorned with hibiscus, vanilla, and orange peel. A beer like Telegraph Brewing’s ode to (Gingered) Julia from Two Gentlemen of Verona and (Bonny) Kate from Taming of the Shrew would certainly break a leg seeing as it’s a Witbier with fresh ginger, pineapple, and Scotch Bonnet peppers.

Even if there are other “Shakesbeer” events such as the Shakesbeer Fest in Stratford upon Connecticut benefitting the American Shakespeare Theatre and another held at The Discovery Center of Murfeesboro, TN, if the SB Hustlers really want to make the world a better place through altruism, they can volunteer to bring their Shakes’Beer at least 650 miles north up to Oregon. I nominate StormBreaker to brew a Trinculo from The Tempest and Baerlic to make Iambic Lambic.