Edit: This story was awarded 2nd place in the Technical Writing category at the 2017 North American Guild of Beer Writers (NAGBW) awards. While I’m extremely grateful to the judges, it’s humbling yet a li’l embarrassing that the estimable technical beer writer Randy Mosher placed 3rd for this cool story, “Hot Process: Exploring the role of heat in brewing” in All About Beer. Stan Heironymus took 1st place with his story on brewing with honey, also in AAB.

Remember Top Secret? Remember that great song in it, How Silly Can You Get? That’s how I think of a lot of beers. How alcoholic can you get? Brewmeister’s Snake Charmer has an ABV of 67.5% How bitter can you get? Flying Monkey’s Alpha-fornication packs 2,500 IBU. From OG/FG to SRM, brewers have a lot of measurements and acronyms to tell the consumer just how something something is. For sour heads, ours may come in the form of TA. Titratable Acidity. Firestone Walker Brewing isn’t the first to use TA in their lab, but they are the first to put how quantifiably sour their beer is right on the label of their funky Barrelworks offerings. 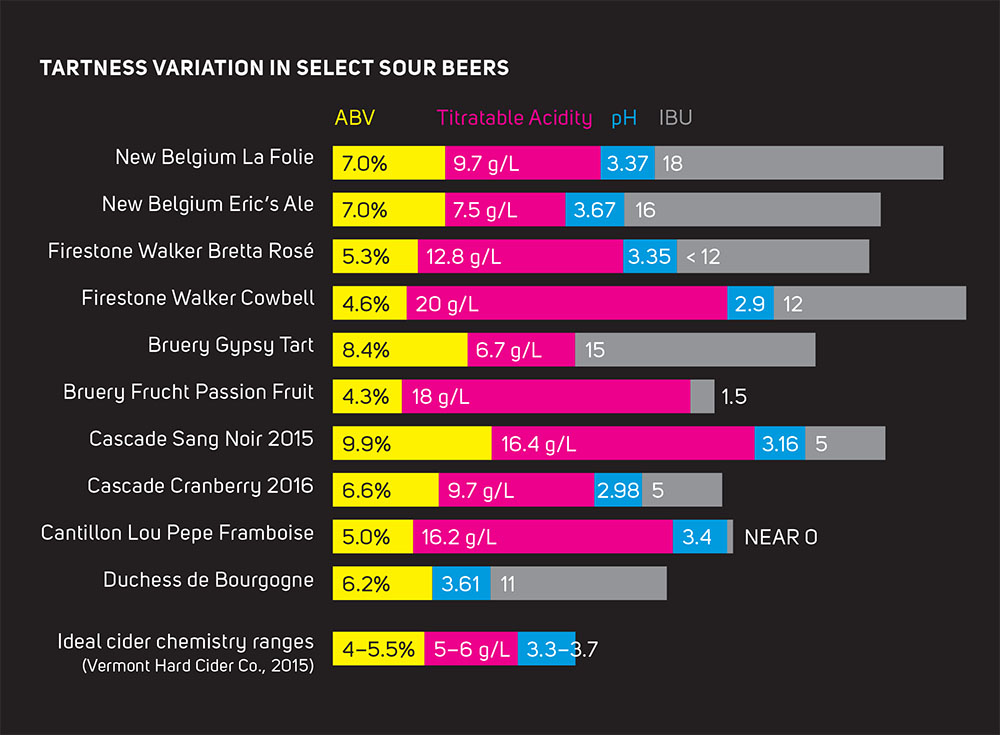 Now, a quick word about this story on Titratable Acidity just published in the November issue of BeerAdvocate: it’s crazy heavy on the chemistry-spiel, and I barely passed high school chemistry. I do this from time to time–I really challenge myself to wrap my head around a story. I had never heard the word “titratable” or “titration/titrating” before pitching this. I bludgeoned these poor master brewers, master blenders, and folks with Ph.D.s in food and brewing science with questions first so I could begin to understand what’s going on with the acidity in certain beers–specifically what types of acids are present and how they got there–and once I felt semi-comfortable with that, I had to write it up for the readers who didn’t have the same access I got. SO… if you think this story is “TL;DR” just imagine poor little me for whom it was nearly TL;DW. (And here I massively applaud my editor at BA, Ben Keene, for whom this must’ve been challenging to no end but did a masterful job, even if he originally assigned me 1,800 words, then caved and gave me 2,000, and somehow got it way, way down to 2,300!)

BeerAdvcoate, the online forum turned magazine, doesn’t republish the print zine’s content online, but if you have #87, there’s my beer story on some of the next wave of funky brewers such as Cellarmaker (San Francisco), Side Project (St. Louis), J. Wakefield Brewing (Miami), and Crooked Stave (Denver), but being the contrarian that I am, I managed to make it center around one of the first to ride the wave, New Glarus’s Dan Carey. I also worked in some P-Funk, but that got cut out of the story, so I’ve taken the liberty of posting the first few grafs of the story below pre-edits:

The future of American sour beers started, in part, back in 1994 when New Glarus Brewing brewmaster Dan Carey developed a spontaneously fermented wild ale in the Flemish Oud Bruin style. He said it was probably a decade ago when he kegged some of that sour brown ale to the Great American Beer Festival. “I was particularly proud of this one and called it New Glarus Sour Brown Ale. But some people just wanted to try ‘the brown ale.’ One attendee in particular, whom I envision him doing a comical spit-take, exclaimed to Carey’s face, “Dude! This beer is spoiled; you have to take this off.”

I bet that same guy today brags about sampling said brown, since as P-Funk maestro George Clinton once said: “Just by getting a little taste of funk, you’re going to be hooked.” New Glarus, like Parliament Funkadelic, have always been ahead of their time.

Carey relayed his story of visiting the Belgian Trappist brewery, Orval, where brewmaster Jean-Marie Rock beseeched Cary, “Why do all of you American brewers copy me?” Arguably one of the greatest beers in the world could be described as simply a Belgian pale ale with an element of Brettanomyces, but there’s nothing simple about it. Unlike the brewers yeast that most breweries propagate, Saccharomyces cerevisiae, “Brett” is not so easily controlled and is a distinguishing character in many of the best Belgian brews beyond Orval including sour Flemish ales and Lambics. Rock continued, “Why don’t you make your own beers?” New Glarus has always excelled at doing just that, making their own beers, and Carey shared some thoughts on the notion of American breweries doing telltale, Belgian-style beers. “Our technology, temperament, and terroir are different. Frankly, if you were going hire a band for an event, if you could afford it you’d prefer to pay a band that plays original music and not a cover band. Rodenbach already exists,” said Carey referencing the notorious Flemish brewery. “Every musician is inspired, but I’m not a cover band.” Call his sour, frequently-fruited beers “lambic style” if you must, but Carey fervently calls them “American sour ales.”