The third beer is the very definition of a cellar-dweller. I’ve never once bought an entire case of a single beer. Except for one time I did and dropped, if I recall, $300 on it. No less.

Why’d I buy a case of Hair of the Dog‘s Cherry Adam From the Wood (Ftw)? It was a favor to a guy I very much doubt is reading this, but a guy who I felt I owed a beer-debt to when he’d provided a memorable (and simultaneously immemorable) experience in Kentucky a few years earlier). By that point in late 2011, I’d been living in Portland, OR for a couple years, attended my first FredFest, and fell in love with brewmaster Alan Sprints’ FTW series. These weren’t sour beers and they weren’t using every obscure fruit under the sun. They were the same strong ales HotD had become known for–beers with big personalities named for (often-four-letter)-named people who’d had a big impact on Sprints. Fred. Otto. Not that the pale ale named for his gramma Ruth was a Belgian Strong Ale, but as someone who had a Grandma Ruth myself, I could relate to his naming convention.

So I went to the dock sale early one morning, I don’t recall much of a line having formed, and dutifully bought the case for my friend. And a year later, when that case was still fully in tact in a dark, cool, crawlspace beneath our basement stairs, I asked the Kentuckian about his plans to procure his favor, which I wasn’t even going to charge interest or the increased market value since this one-of-100 case had developed quite a cult following. CAFTW became the ISO-acronym around beertrader sites.

That email thread was quite short. And fruitless. And I began treating myself to the occasional 12-ounce bottle of CAFTW.

Soon, I started popping ’em at bottle-shares. It made frequent appearance at my themed cellar-clearings, like all cherry beers. (Note: I did start an entire beer festival devoted specifically to barrel-aged sour cherry beers called Kriekfest, so you can believe I’ve gottta lotta cherry beers in my stash.)

But 24 bottles is a lot. And I still had 5 left at the start of this isolation. Not that ISO any more lation at this moment!

When I popped the top, a semi-fart of autolysed air leaked out. The liquid is less bubbly than Mike Pence on Ash Wednesday. But at the cost of roll of March-2020 Charmin per bottle, I wasn’t going to drink a fair amount without trying to pixilate out all but the silver lining: Nice, bourbon-soaked black cherry flavor.

The next day, I gave a bottle to a friend with the suggestion that he try to re-carb it first and with some life breathed into it, I think Adam could make it through another eve. But that still leaves me with 3 bottles.

Wifey's jealous I took my 4 yr old but not her yet. Not my fault she was out of town during Scout's opening. SE-PDX breweries opening fast n furious. 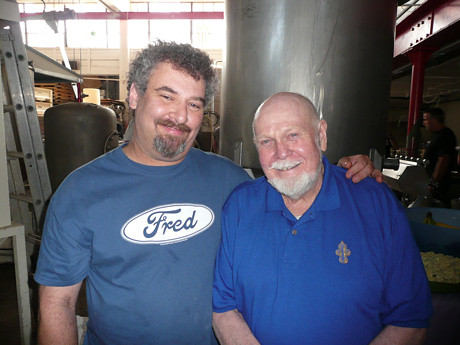 Above photo from Brookston Beer Bulletin, 2008

In numerology, 89 is considered an “angle number” and that, “Repeating Angel Number 89 can be a message about your lifestyle and career choices and the angels guide and support you as you focus on your life purpose.” While that’s a bunch of hooey, what’s anything but malarkey is that Fred Eckhardt‘s upcoming 89th birthday party, aka Fred Fest 2015, is possibly the very best beer celebration we have here in Portland, and I’m aware I’m saying this as CBC is only halfway through. Tickets go on sale tomorrow for the party on Sunday, May 3 at, as always, Hair of the Dog Brewing.

More on the fest:

Attendees will be treated not only to a rare assortment of hand-selected beers, but also light fare cooked in and with beer and of course birthday cake and a round of “Happy Birthday”, just for Fred. Cheeses, chocolate, candy and even cereal will be offered in abundance so attendees can experience some of Fred’s famed beer-and-food pairings.

Tickets are in advance. Entry into FredFest includes a souvenir glass, free ticket for a raffle of bottled specialty beers and four hours of sampling, sipping and story-telling with Fred. Tickets are limited and they will go fast (they’ve sold out every year to date), so order yours today before it’s too late! Don’t have a PayPal account? Follow the link to “Order Tickets” and you can still pay directly with a credit card. Tickets are not mailed out, they will be at the door will-call style. Please bring a copy of your PayPal purchase receipt with you. Make sure if you are purchasing the tickets for a friend that you include their name in the notes section so we can get all ticket holders into the event quickly.

As always, all proceeds from FredFest and any related auctions/raffles will go to a charity of Fred’s choice.  The 2014 recipients chosen by Fred are the Guide Dogs for the Blind, International Medical Corps, and the Bob McCracken Scholarship Fund.

I really liked the A&E editor at Willy Week when I came on board. Then there was a schism. Then a new guy was hired and we got back into bed together. Me & the alt-weekly, not the new dude. It started with this post on Belgian-style Hair of the Dog going to Belgium.

For the last five years, much-decorated Belgian brewmaster Dirk Naudts, who develops beer recipes for brewers throughout Holland and Belgium, brings an American brewer over to his village, Lochristi, to collaborate. The chance to work with Naudts at his Na De Proef Brouwerij is much sought—beer writer Michael Jackson once described Naudts’ ultrasophisticated brewhouse as “the ultimate toy for the aspiring homebrewer.”

This year the honor goes to a Portlander, Alan Sprints from Hair of the Dog.
Sprints is the first Pacific Northwesterner to get the honor. Other brewers selected have come from San Diego’s Lost Abbey, Michigan’s Bell’s and Maine’s Allagash.
SBS Imports founder Alan Shapiro says the beer will be a blend of quintessential Hair of the Dog Fred—a Strong Ale named in honor of local beer guru Fred Eckhardt—named Flanders Fred, a reference to the Flanders Red beer style dubbed “Burgundies of Belgium.”
Expect the result to pack a tart cherry sourness and bone-warming boozy heat. It’ll be perfect for aging, too. Too bad we won’t get to try it until this summer, as Sprints won’t actually brew the batch of Fred in Belgium until March. The collaboration beer should first see release through the former Michael Jackson Rare Beer Club in June, with full U.S. release in July.
Luckily, the collaboration partner’s home state always receives the largest allocation.
Plus other PDX beer news…