Usually for my FSR column, there’s an actual column and it’s accompanied by 8 beer reviews. This issue, they only had room for the reviews.C’est la vie. In December of 2017, I suggested these to warm up with. 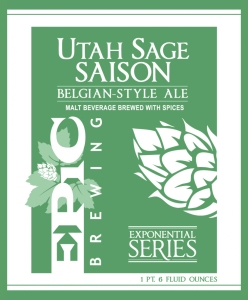 I love herbal beers but I particularly think sage works wonders in the right beer. But good luck pitching a story about the so-narrow-it’s-nearly-two-dimensional field of sage beers. Unless there’s a hook, a peg, an angle. Hence, I waited months until I figured CraftBeer.com would want something on Thanksgiving beers, especially ones to suggest that aren’t flavored like pumpkin pie! And since a good stuffing mix and turkey brine includes sage, well, here’s a round-up of beers so sagey, they’re sagacious. 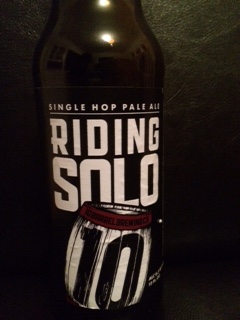 Among my myriad New Year’s Resolutions for 2016 is to do more beer reviews. Between the samples I happily receive on my doorstep, beer travels that find me at different breweries across strange, new lands and just happening upon a new offering at some local watering hole, I want to ensure I’m paying good attention to what I’m drinking.

Seeing as a delivery guy just dropped off a bottle at 6:30 on a Saturday night, clearly it’s time to begin drinking. The beer is from 10 Barrel in Bend (not the 10 Barrel pub in Boise or Portland or the recently-announced forthcoming one in Denver). It’s called Riding Solo and it is, as the name suggests, a single-hop pale ale. Comet hops to be precise. Not that you’d possibly know that from the label copy. It reads: “We could talk about this single hop, but we’d rather talk about Benny, the brewer behind this pale ale. 4 years ago Benny was on the fast track working for a large brewery, and then it all came crashing down. He made a bad choice, climbed the wrong building in Bend and found himself in the clink without a job. We hired him the next day and he has been crushing it ever since. One brewery’s loss is another brewery’s gain. Cheers to the man behind the beer.”

Man is that a strange way to market a beer that theoretically has some educational aspect to it. It shows drinkers the aromatic and flavor profile of the nearly extinct Comet hop, a USDA varietal that I’ve personally never encountered. And anyone who buys this beer won’t know that they’ve had it. (Unless they are compulsive about every beer they try or read my oft-neglected blog religiously.)

Upon cracking the crown I was met with an herbal whiff and I’m only half referring to reefer. At first sip, I was struck by the spicy, dank bitter beer—like a skunk smoked a spliff cut with black pepper and dried grapefruit peel. It falls into the garlic’n’onion descriptor, too. Although they call it a pale ale, it’s orange in color and at 6.8% ABV and 67 IBUs it presents itself like an India Red Ale in malt and hop character. In fact, the spiciness makes it taste like there’s some rye malt in the grain bill, but doubt there actually is because then they’d probably have called it Ryeding Solo.

This is the second installment of this type of oral history of a Portland beer that would go onto help shape not only the Portland beer scene, but impact the national beer climate as well. Crazy to think that before this beer debuted in 1996, most beer drinkers in America had no clue what an India Pale Ale was. 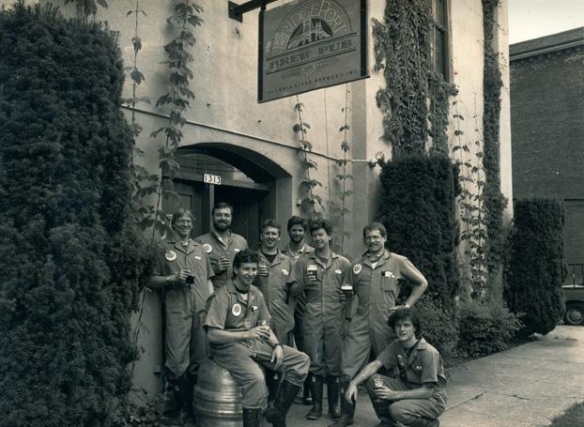 Wherein I review the following new releases on shelves or on tap:

Finally, well, most recently, this review of Rogue’s Brutal IPA…per the editor’s request to review it particularly as it tastes having traveled to Amsterdam. (Jan. ’14)

The Big Island Brewhaus, tucked into previously-existing Tako Taco Taqueria, has a lineup of beers that’s amazing, and I was surprised to discover a beer called Red Sea — brewed in collaboration with none other than Caldera Brewing from Ashland in Southern Oregon.

On top of a delectable imperial red ale — think hoppy IPA but with red-hued caramel malts for added body — chocolate, molasses, pink peppercorns and Himalayan pink salt were added for richness and spice. The end flavor is not unlike a sweet-and-savory molé

For nearly 500 years, Germans mandated that beer be made from only water, hops, and barley. More recently, however, Northwest brewers began embracing virtues of rye. This segment of Portland Monthly’s feature, “Wallet Guide,” explored five rye-fueled brews that embrace the flavor-packed grain.

When the new Short Season A baseball team announced it was coming to the Portland suburb of Hillsboro, there was a modicum of excitement. Who needs an MLB team when we’ve got MLS and even MLU teams? However, when the hardball team from Hillsboro announced they were going to be called  the Hops, well now, stand back. (Though confoundingly, the hop cone team mascot’s name is Barley…) Stepping up to the plate to sponsor the Hillsboro Hops and create an exclusive beer is Oregon’s longest running craft brewery, BridgePort. Long Ball Ale was brewed to honor beer’s MVP ingredient as well as the sports team named after it. The beer is a light-bodied, summery golden ale.

I don’t like reading any listicles of Best Of… The 14 Greatest… etc, so I really don’t like writing them. Having said that, sometimes I like the spending money and I cave and write them. With that set up, welcome to the Six Absolute Best West Coast IPAs In the World According to Science.

In Portland, IPAs sell themselves. Over one in four beers we consume locally is a hop-tastic IPA, and in terms of sales growth, they’re speeding up over 30 percent. While we don’t have fancy sales stats for stouts, suffice it to say, people around here mostly shy away from them, possibly for fear they’re “too heavy.”

That bias doesn’t take into account the fact that a dry Irish stout is one of the lightest classic beer styles, or that boisterous Russian Imperial Stouts completely dominate user-generated best lists on RateBeer and BeerAdvocate. Where does that leave a style that is essentially a hybrid of the two? Black IPAs are recognized formally as American-style black ales by the Brewers Association, but are known locally and colloquially as Cascadian Dark Ales.

In this era of ever-hybridized India Pale Ales, only the dark version — in which recipes call for the hop additions of an IPA with the roasted malt bill of a stout or porter — has really taken off at the races. It’s safe to say Turmoil CDA from Eastern Oregon’s Barley Brown’s is the odds-on favorite.